THE SWORD OF DONALD CAMERON OF LOCHIEL 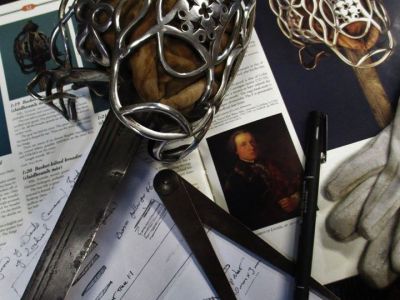 Donald Cameron was the 19th Clan Cameron Chief who through the 1745 Jacobite Risings was a prominent commander who fielded a large number of soldiers from throughout the Lochaber area.

Lochiel fought at the Battle of Prestonpans, earning his name “Gentle Lochiel” as he ensured enemy prisoners were well treated. He was subsequently wounded at Edinburgh Castle in the position of Governor of Edinburgh, wounded at the Battle of Falkirk and advanced with the Jacobite forces alongside Bonnie Prince Charlie to fight at Culloden.

At Culloden, Lochiel led the Cameron men in a Highland charge against Barrell’s Regiment. He had fired his pistol at them and was within ten paces of engaging in close combat. As he was drawing this very sword, he received a volley of grapeshot, smashing both ankles and he was swiftly carried from the field.

The silver fittings were cast by a silversmith in the Canongate, Edinburgh before being passed to Walter to fully craft into finished form.

The material liner originally was a crimson red and the pommel tassle originally bright yellow, displaying the red and yellow colours of Cameron of Lochiel’s arms.

The sword has been passed directly down the original family and is owned by the current and 27th Clan Chief, Donald Angus Cameron of Lochiel.

Paul MacDonald is a sword maker, master-at-arms and owner of MacDonald Armouries in Edinburgh