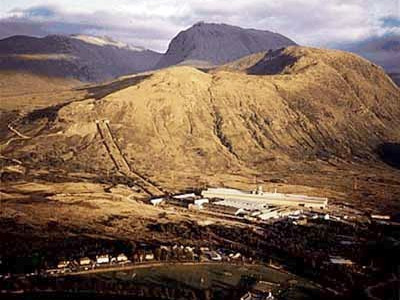 The Lochaber Power Company and the British Aluminium Company were formed, and by 1924 work had begun on constructing a smelter at Fort William.

The amount of electricity required to produce aluminium means that it is more economical to smelt in areas where power can be produced cheaply, rather than in proximity to the source of aluminium ore.

The company was authorised to develop an area of 303 square miles around Ben Nevis where there is an average rainfall of 406 cm per year. This was ideal for the hydro-electric scheme that was needed to manufacture the aluminium.

The Lochaber aluminium works opened in 1929 and the first cast of aluminium was produced on the 29 December 1929.

The civil engineering project to power the Lochaber Smelter required three stages and took more than two decades to complete.

In 1926 work began to construct a 15-mile tunnel through the solid rock of the Ben Nevis mountain range from Loch Treig to Fort William.

This concentrated natural water power was channelled down two steel pipelines, falling nearly 183m to the hydro-station below.  Here 10 giant generating units each produced 10,000 horse-power to supply the factory with electricity.

At the height of the project 3,000 navvies and tradesmen were employed on building the works, pipelines and hydro-electric station.  They excavated the tunnel and constructed a 21-mile network of railways.

In 1934 Laggan Dam was completed. It was built to increase the water storage capacity for the smelter. Water from the dam travels to Loch Treig through a 2 ¾ mile long tunnel.

Completed in 1943 by the 1st Tunnelling Company of the Canadian Army.  This project channelled the headwaters of the Spey, via Loch Crunachan and a 2-mile man-made tunnel into Loch Laggan extending the water catchment area still further.

By the time the project was completed it had cost the company over £5 million, that is equivalent to £280 million today.

In 2011, under the ownership of Rio Tinto Alcan, a £45m modernisation programme was completed.

The Lochaber Smelter is the last remaining aluminium smelter in the United Kingdom and is now operated by Alvance British Aluminium.