THE HIROSHIMA PLAQUE AND THE PEACE CAIRNS

When Highland Council relocated to the Charles Kennedy Building in 2018, they gifted an array of interesting items to the Museum.  Among the objects donated was the original Hiroshima Plaque that once stood in the Parade, Fort William.  (A replica plaque now stands in its place) The plaque along with details of its fascinating history are now on display at the Museum. 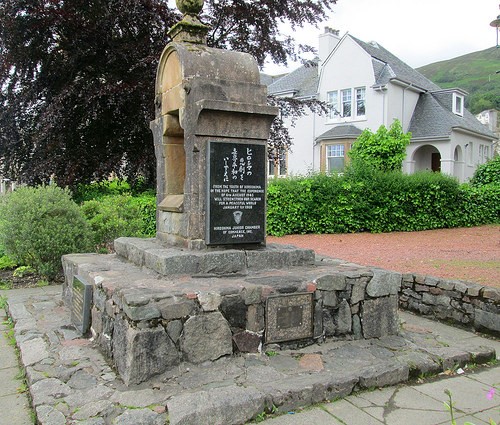 The Second World War ended soon after nuclear bombs were dropped in Japan at Hiroshima and Nagasaki in August 1945.

Shortly afterwards Bert Bissell, MBE (1902 – 1998), a mountain climber and peace campaigner from Dudley arrived with members of his Dudley Bible Class in Fort William on V-J Day, where they climbed Ben Nevis and dedicated a Peace Cairn to universal world peace at the summit.

In addition to the memorial on Ben Nevis, Bert was instrumental in getting similar cairns placed on other world peaks.  This resulted in him obtaining an MBE, the World Methodist Peace Award and acclaim from the Japanese government, which included visits to Hiroshima.  Bert was also awarded the Freedom of both Dudley and Fort William.  He is buried in the churchyard at Glen Nevis.

Many people were horrified at the dropping of the atomic bombs on Hiroshima on 6th August and Nagasaki on 9th August 1945, and provided monuments and plaques noting this.

The Hiroshima plaque was presented to Fort William as “A memorial from the youth of Hiroshima in the hope that the experience of 6th August 1945 will strengthen our search for a peaceful world. January 1st 1968.”  This was exhibited as part of a Peace Cairn on the Parade, Fort William.  Sadly, it was damaged some years later, but has since been repaired.

A Peace Cairn was later presented by the people of Dudley and Fort William to Hiroshima where it remains on display in the Hiroshima Peace Memorial Park.

The peace climbs at Ben Nevis were repeated annually for many years afterwards.  These have recently been resurrected and a climb took place in 2018.  Bert ascended the mountain over 100 times and undertook his last climb at the age of 91 years old.  He was frequently supported on his climbs by the people of Dudley, Fort William and members of the Lochaber Mountain Rescue Team.

Picture: The replica plaque sited at The Parade, Fort William.

From an article first published in 2018. Vanessa Martin is Curator at the West Highland Museum.