Some beautifully embroidered postcards were recently gifted to the Museum. 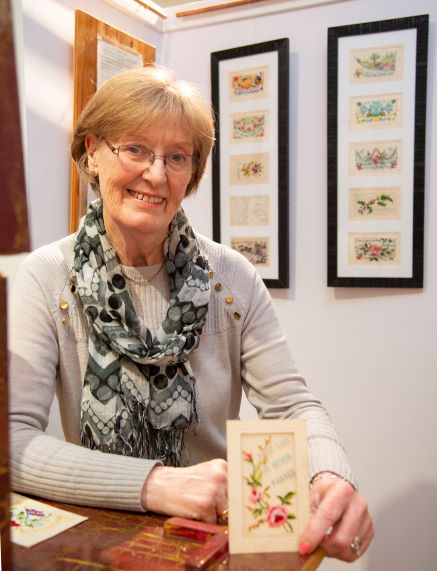 These postcards are part of a much larger collection sent by John McCallum to his wife Mary from France during the Great War.

Although John was also a school teacher, at the time of his marriage during the First World War, he was serving as a Sergeant in the 13th Battalion of the Argyll and Sutherland Highlanders.

Mary had been educated at Fort William Senior Secondary School.  She qualified as a teacher and taught at Ballachulish until her marriage in 1916.

The newly weds were soon separated.  Six months later John was shipped off to fight on the Western Front.

Between October 1916 and February 1919 John sent Mary numerous postcards detailing his life in France. The postcards are addressed to Aulltshellach, North Ballachulish.  This was the family croft where Mary had been born.

Embroidered cards were popular with the troops.  They were made by local French women as a way of supplementing their income and sold to soldiers as gifts to send home.

After the war, John was discharged from the Army and appointed Headmaster at Kinlochleven School.  The couple started a family soon afterwards.  They moved to Tobermory and then Innellan where John continued to teach.  The couple went on to have two sons and three daughters.

On John’s retirement in 1938, the family moved to Glasgow as they felt their family would benefit from better employment and educational opportunities.

The postcards were gifted to us by John and Mary’s granddaughter, Catriona Bruce.  She is pictured here wearing her grandmother’s engagement ring.

Vanessa Martin is Curator at the West Highland Museum.