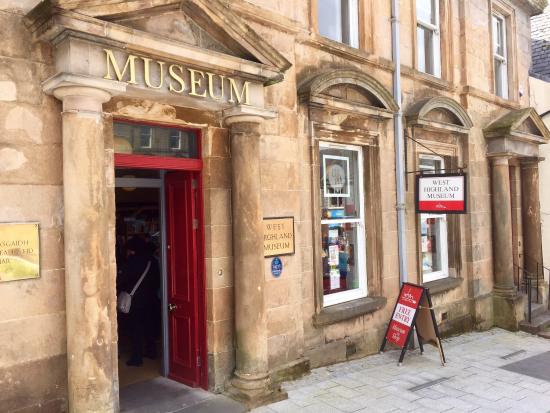 1. A milestone is within reach

The Museum celebrates its 100th birthday in May 2022.  Descendants of original founders Victor Hodgson and Elizabeth Ryan to this day are directors of the Museum.

2. We can print our own currency

A copper plate made by Sir Robert Strange and intended to print currency for the Jacobites was discarded after the Battle of Culloden.

The plate on display was used to print “bank notes” in 1928 to raise funds for the Museum.  Prints sold for 10/6 each.  In 2019 a print sold for £875 at auction in Edinburgh. We plan to print again from the prints to celebrate our 100th birthday.

Queen Elizabeth I of Scotland visited in 1991.  She viewed objects associated with her great-great-grandmother, including a quaich drank from by Queen Victoria and purportedly used by Prince Albert and Bonnie Prince Charlie too.  Queen Victoria wrote about the incident in her Highland Diary.

Our current Queen expressed amazement to staff at the amount of hair that purports to have belonged to Bonnie Prince Charlie that is displayed in museums across Scotland!

When the Old Fort was demolished to make way for the West Highland railway, the Governor’s room was moved in its entirety to the Museum and reassembled. It is thought the order for the Glencoe Massacre was signed in this room. A card table believed to have belonged to Colonel John Hill, Governor at this time, is also on display.

The room is particularly popular today with Outlander fans.

A rare 1st pattern FS fighting in the Commando exhibition was rescued by the Police.  Handed in for destruction in Fife as part of a knife amnesty, the previous owner wanted nothing to do with it. It was spotted by an eagle-eyed officer who gifted it to the Museum.

An illicit whisky was left on the steps of the Museum by an anonymous donor in 1924.  Sadly, it can no longer be used to distil a dram, as the folk from the Department of Customs and Excise punctured holes in it!

From enchanted ‘faery’ bagpipes said to have been played a Bannockburn, to pipes once owned by Bonnie Prince Charlies, to rare examples of the clàrsach.  The museum promotes the musical heritage of the Highlands.

The Museum has closely been associated with the Jacobites since its inception staging its first Jacobite Exhibition in 1925.  While plenty of museums claim to have relics associated with Bonnie Prince Charlie such as his hair and clothing, it is thought that we are the only one to have a tooth on display!

Our very popular Secret Portrait of the Prince is also thought to be unique.

9. It celebrates the Outdoor Capital

As Outdoor Capital of the UK, Fort William has long been associated with outdoor adventure activities.  Nowadays the lochs offer some of the best white water canoeing in the country.  This is nothing new, with the remains of a dugout boat dating back more than a thousand years in our collection.

Situated at the foot of Ben Nevis, the UK’s highest mountain, the Museum has a close connection with mountaineering, climbing and the Model T Ford that ascended the Ben in 1911.

10. Home to a celebrated Highland collection

The Museum was chosen to care for the renowned Carmichael Collection.  Alexander Carmichael (1832 – 1912) was a famous folklorist and antiquarian who collected folklore, local traditions, natural history observations and material objects from people throughout the Scottish Highlands.

Ron Cameron is a Director of the West Highland Museum and Vanessa Martin is the Curator.