Continuing with the article from the London Illustrated News, dated 27th January 1872, in which the Victorians marked the 150th anniversary of Flora MacDonald’s birth.

Protected by her passports, Flora visited Clanranald and his lady at their residence at Ormaclade, a few miles distant from her brother’s house at Milton; and here arrangements were promptly made for obtaining a boat and crew, and for extemporising for the Prince suitable wardrobe for his acting the part of Betty Burke. They then visited the hiding-place of the Prince, and found him engaged in roasting the heart and liver of sheep upon a wooden spit! This was Flora’s first interview with the Prince. They all dined together, and laughed heartily over the Prince’s appearance when he joined them in the dress prepared for him, consisting, we are told, “of a flowered linen gown sprigged with blue, a cap and apron, and mantle of grey-coloured camlet, made after the Irish fashion, with a hood.”

A camlet (or, sometimes, camlot) is a garment traditionally woven from goat’s hair.

But, in the midst of their merriment, at that very time a voice warning of the danger of their position was hurriedly brought to the hut. A messenger arrived to tell Lady Clanranald that an officer and troops were at her house, and that she must return immediately. She had to bid farewell to the Prince; and now he had to part with his last companion, O'Neal. It was trying and an anxious moment, and the alarm was increased when, on reaching the shore, wet and much fatigued, they saw four wherries full of armed men, making apparently for the beach. But the boats passed on, within gunshot of the place where the Prince and his companions lay concealed amongst the heather. This danger passed, they embarked in the boat and got safely away to Skye. The passage was stormy, wet, and tedious. Next day they sighted the coast of Waternish; but as they approached it, a party of soldiers appeared on shore, armed, and possessed of a boat, but having no oars. To put back to the water was the work of a moment; a few vain shots were fired from the shore; but no harm was done, and they sought a landing at a more convenient place. This was found within few hundred yards of Sir Alexander Macdonald’s seat of Monkstadt House. The chief himself was at this time at Fort Augustus, in attendance upon the Duke of Cumberland ; but his wife was at home, and, like the rest of the Clan Macdonald, sympathised with the Chevalier much more than with her husband and the Royalists. Flora waited on Lady Margaret, and was received as became her position. The house was full of Royalist officers, one of whom beset her with questions as to the search for the Prince at that moment going on in the Long Island. The same officer had been in the custom of examining every boat which landed from Uist; but, meeting this young lady in the drawing-room of Lady Macdonald, and deceived by the easy manner in which she accounted for her appearance and parried his efforts to procure information, his suspicion was disarmed, and Flora found opportunity, in course of the evening, to communicate with Mr. Macdonald, of Kingsburgh, who acted chamberlain or factor for the Macdonald estates, and with Lady Margaret, both sound Jacobites.

Meanwhile, the poor Chevalier had been left all this time sitting on his trunk by the seashore. The difficulty was what to do with him. To offer shelter at Monkstadt would be ruin to the Macdonalds; but Mr. Macdonald of Kingsburgh, who was a cool, sensible man, said he would take him to his own house, “I am now an old man,” he said, “and it makes little difference whether I am to die with a halter round my neck or a natural death, which cannot now be far distant.”

Kingsburgh left forthwith to find the Prince, taking in his hand a wallet of wine and biscuits. It was not easy to discover the Prince’s whereabouts, but when approaching the place where he ought to be found, he saw some sheep run off as if startled, and, with a farmer’s instinct, made for the source of the alarm. The Prince had seen him approaching, and came forward in very unfeminine manner, with a large knotted stick in his hand. “Are you Mr. Macdonald, of Kingsburgh?”, he demanded, and matters were of course at once amicably arranged.

The journey across country to the house of Kingsburgh was not without its perils. Neither Kingsburgh nor Flora Macdonald, with their retinue, could travel in Skye without being seen by all observers; and Betty Burke had an unfortunate trick of bowing instead of curtseying to passers by, and while crossing the streams that traversed the route she either kilted her petticoats indecently high or let them draggle through the water. Kingsburgh had to remonstrate. “Your enemies,” he said, “call you a pretender; but, if you be, I can tell you, that you are the worst at your trade I ever saw!” The whole party (Charles, Kingsburgh, and Flora Macdonald) arrived in safety at Kingsburgh House about eleven o’clock at night. Thence, after a night of rest such as he had not enjoyed for months, the Chevalier made his way to the Island of Raasay, and. after many further wanderings, escaped to France.

The fact of the rescue was soon discovered, and it was traced to Flora Macdonald. She was apprehended; so were all who had to do with the enterprise, and sharply had they to pay for their loyalty.

Flora Macdonald was taken from Leith to London in a British government man-of-war on 7th November 1746, amidst the waving of flags and the cheers of thousands of spectators.

By this time the Prince had been long safe in France, and, whatever may have been the energy with which those acting under the Duke of Cumberland prosecuted the search for him in the Hebrides, there can be little doubt that those still higher in authority were secretly grateful that he escaped. The danger of another revolt was not so great as that arising from the embarrassment of either keeping or killing so illustrious and popular a prisoner.

Public sympathy in London went strongly in favour of Flora Macdonald that the Government, after a little while, released her from the Tower, to be placed in the custody of friends who became responsible for her appearance. The house of Lady Primrose of Dunipace was open to her, and there she resided till the amnesty of 1747 set her free.

It seems that Lady Mary Primrose, a prominent Jacobite sympathiser of French ancestry, became Flora’s benefactor in November 1746, during Flora’s incarceration in London, and presented Flora with a bronze brooch, and a French, painted sandalwood fan. Three carefully painted images on the fan depict a wealthy couple, and what is thought to be their nursemaid tending their child. Lady Primrose’s French heritage may explain the fan’s origins. These items, among other interesting artifacts closely associated with Flora MacDonald, form part of the Carmichael collection on display on the West Highland Museum.

Following Flora’s release on parole, she was allowed to reside at Lady Primrose’s London home as a guest.

Meantime Flora was, so to speak, the rage of the season. Everyone visited her, even the Prince of Wales, father of George III, to whom it is reported that she said she would have done the same for him had she found him in like distress. A sum of money was collected for the gallant young lady, which Lord Mahon quotes at £I,500.

The amount must have been considerable, for as late as April, 1761, Flora acknowledges the receipt of £627, lodged with a business firm in London on her account by Lady Primrose.

Soon after returning to the Highlands, Flora married the eldest son of Kingsburgh, by whom she had a large family of sons — all afterwards officers in the King’s service — and two daughters. They emigrated to North Carolina, but returned, after many adventures. One of these was, that in crossing the Atlantic they were chased by a French privateer, and action took place. Flora’s spirit was up, and she kept the deck all the time, but had the misfortune to break her arm in the fight. Hence, she used to say that she had fought for the House of Stuart and for the House of Hanover, and suffered for both

In the pleasant old house of Kingsburgh—of which no vestige remains save a few old sycamores—Flora received Dr. Samuel Johnson and Boswell on their memorable tour of Skye, in 1773, and both seem to have been much impressed by the simple dignity of the lady. She communicated to them a narrative of her adventures, which will be found in the “Journal of a Tour to the Hebrides”, together with much interesting gossip regarding the place, the people, and the period.

Quantum cedat virtutibus aurum (with virtue weighed, what worthless trash is gold) — was Johnson’s philosophical reflection as he quitted the kindly house of Kingsburgh; and he has done much by his references to Flora Macdonald to keep fresh the memory of her loyal devotion. She died in 1790. Even among Highland funerals, that of Flora Macdonald is celebrated for the multitude of people who assembled at it. A lingering love of the cause attracted many, as it could by then be indulged in without danger either to themselves or to their Chief; but Flora’s personal virtues were great, and to this day there is no name mentioned in Skye with more reverence and respect than that of Flora Macdonald. It therefore meet and right that a fitting monument has been erected over her grave.

‘Meet and right’, meaning ‘it is right to so do’, seems to be another expression that has passed from common usage, although it has now become the name of online dating app!

Similar articles to the one above appeared in many newspapers during 1872, seeming to indicate that the legend of Flora MacDonald was already marked as one worthy of commemoration. Perhaps our descendants will look forward with equal interest to the celebration of Flora’s 450th and, even, her 600th anniversary! 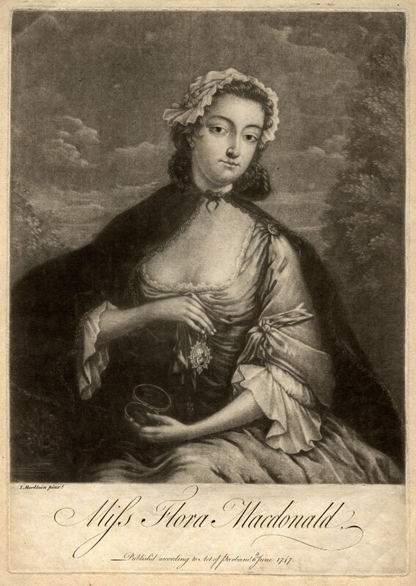 Mark Bridgeman, author of Blood Beneath Ben Nevis, has appeared on ITV, Channel 5, and BBC Radio. His stories have been dramatised on Canadian radio, and featured in newspaper serial form. Nominated for the John Bryne Award in 2022, Mark has also appeared at several literary festivals presenting his popular 'Trial By Jury' event.

​He is also the author of eight books (and counting…) which are currently available in paperback. For further details please visit www.markbridgemanauthor.co.uk