Four beautiful examples of 19th century pistols were gifted to the West Highland Museum in 2017.

The pistols were owned by Major James MacFarlane (1774 – 1849).  James father died when he was only two months old.  His mother Janet was helped out by her brother, Colonel William Alston, who years later procured a commission for James in the Honourable East India Company’s Service.  Having spent nearly 20 years in India he returned to Britain in 1810.  However, the years in India had taken its toll on his health and James needed to live within reach of the healing waters of Bath rather than return to Scotland.  After serving as Adjutant at Chatham Barracks, he died in 1849 aged 75 years old.  He had earlier married his first cousin Anne Alston, by whom he had four sons and a daughter.  The eldest son, Rev. James Duncan MacFarlane was great grandfather to the donor of the pistols.

Dr Patrick Watt, former Curator of Modern History and Military Collections at the National Museums Scotland examined the pistols in July 2018 and was able to provide the following details.  The smaller pair of pistols are percussion cap and were manufactured by Hewson a fairly big manufacturer of the era.  The pistols date to the first decade of the 19th century. The pistols would have around 30 pace accuracy.  This type of weapon is small and designed to be hidden on the person as a last chance weapon.  (i.e. to be used after sword, dirk, pistol as a last resort, either to take a life or end your own.)  In this case the pistols were probably a last defence weapon of an officer in India.

The larger pistols are a mass-produced weapon made by W. Powell and were manufactured in the 1830s, or early 1840s.  These are not a pair.  Belt clips show these are for use by a right-handed person.  A pistol and a spare.  They probably would have been sold in a presentation box together. One to be kept on your person and the other a spare. 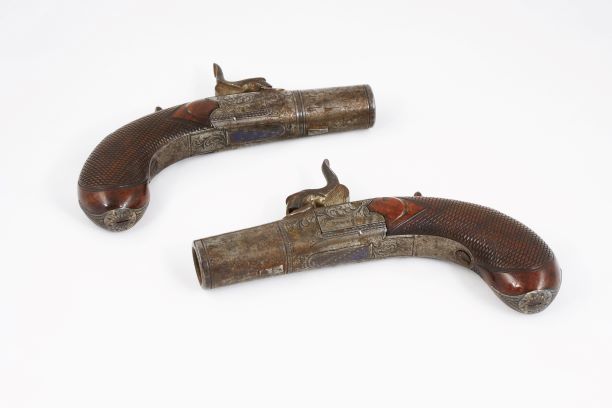 From an article first published in 2018. Vanessa Martin is the Curator of the West Highland Museum.