The 31st December 2020 marks the 300th anniversary of the birth of Prince Charles Edward Stuart.  To commemorate this special occasion the West Highland Museum has organised a series of articles written by scholars, academics, authors, and Jacobite enthusiasts.  In this first in the series author Mark Bridgeman examines how the Victorians dramatised the Prince’s story.

31st December 2020 marks the 300th anniversary of the birth of Prince Charles Edward Louis John Casimir Sylvester Severino Maria Stuart – better known to us as ‘The Young Pretender’ or ‘Bonnie Prince Charlie’. We now have a more rounded view of the Prince’s role in Scottish history, but it is interesting to reflect on how Victorian Britain chose to remember his life, the Jacobite cause and his ultimate escape from Scotland.

As the 100th anniversary of the 1745 uprising approached, and the young Queen Victoria took her place on the throne, history’s view of the Jacobite cause was very much a romantic and wistful one. Prince Charles Stuart was portrayed as a romantic, heroic failure. This was emphasised by the historic fiction of Sir Walter Scott who created a nostalgic and colourful image of Scotland’s past; suitable for widespread consumption and playing to the desires of those able to afford the new and developing market of journals, newspapers and books then starting to become available. In Scott’s Waverley Novels the Jacobite cause, once again, became a publicly acceptable topic of conversation. Even King George IV visited Scotland in 1822, opening up public interest even more; and fuelling the public’s appetite for all things tartan and Jacobite.

The growth in theatres and music halls also saw a market for visual and musical entertainment not previously seen. But how could the defeat at Culloden, the massacre of 2,000 Jacobite soldiers, and Charles’ subsequent flight in failure, possibly be turned into a box office bonanza, to match the success of Sir Walter Scott’s novels? Step forward one Mr John Wilson. 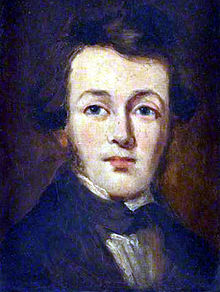 John Wilson had been born in South Princess Street, Edinburgh, in 1800, the son of a coach builder. As a young printing apprentice, he helped to typeset the Waverley Novels at the Ballantyne Brothers Printworks in Edinburgh. Whilst still a young man he drew crowds to various Edinburgh churches, all anxious to hear his rich tenor voice. After studying music in both Edinburgh and London, singing at Drury Lane and Covent Garden, he sang before Queen Victoria at Taymouth Castle in Perthshire during her famous visit in 1842. It was here he became convinced that the impending 100th anniversary of the ’45 rebellion could prove lucrative – both financially and for his burgeoning career.

So, in late 1842, at the Store Street Music Hall in London, John Wilson opened his evening of musical entertainment, with its less than snappy title of ‘The Adventure of Prince Charles, with the Jacobite Songs, illustrative of the Rising in 1745’.  The programme was an immediate success. Wilson narrated the show and performed all fourteen songs himself drawing sell-out crowds and positive reviews from the London Press. An early newspaper review stated that ‘The song “Charlie is My Darling” is a gem of itself’, and “Flora McDonald’s Lament” is one of plaintive and unsurpassable beauty.’

The musical soiree became a huge favourite, earning John Wilson a large sum of money. He toured extensively with the show, taking in theatres and music halls all across Scotland, England, Ireland, and even North America. One review heaped further praise on the eminent Scottish vocalist, ‘The Hall was densely crowded by one of the most respectable audiences that ever did honour to genius’. Another critic responded with, ‘the ballads chosen comprise infinite contrast expression, from the most humourous comedy to the deepest pathos and the highest heroism.’

So high were the demands on John Wilson that he could not satisfy the public’s insatiable appetite for more and more performances of the show. Many other entertainers jumped on the Victorian bandwagon; producing pale imitations of the musical, which failed to please their audiences. However, one particular individual took the challenge even further – perhaps becoming the country’s first unauthorised tribute act! The Oxford Chronicle of 1845 reported on the proceeding,

‘A few days ago the inhabitants of Gloucester were more than a little pleased to see the announcement made that Mr. Wilson, the celebrated Scotch vocalist, was about to pay them visit and give his popular entertainment of “The Adventures of Prince Charles, with the Jacobite Songs”. It was soon discovered, however, that the announcer was not the real Mr. Wilson, but an impostor, who had assumed, his name as well as the title of his most popular entertainment, thereby going a little further than Mr. Wilson's other imitators. The impostor had contrived to secure the patronage of the mayor, and fleeced his worship out the price of a goodly number of tickets. From the mayor he went to several other persons, and mentioning the mayor's name, was equally successful in duping then, till at last he came to a gentleman who had seen and heard frequently the veritable Mr. Wilson, and upon his telling the fellow the same he was forced to admit that was not Mr. Wilson, but his nephew. He made his escape with the prize-money he had secured, and it was found that he had not even engaged the music hall, but merely had some bills printed, which enabled him to carry on his nefarious scheme. The police have been searching for him ever since, but we have not heard whether they have yet succeeded in caging the mocking-bird. The veritable John Wilson is too well known by his frequent visits to halls to render any attempt at imposition safe here.’

So successful was John Wilson’s musical based on the life of Prince Charles Stuart that he took the show to the Americas and eventually settled there. Wilson passed away of cholera at Quebec on 8th July 1849, aged just 48 and was buried in the Mount Vernon Cemetery. However, friends erected a memorial to him at Dean Cemetery in Edinburgh, to help commemorate the man who played such a large part in creating the Victorian romantic myth surrounding Bonnie Prince Charlie, but who is now largely forgotten.

As for Prince Charles Stuart, our interpretation of his contribution to history was hugely coloured by the works of Sir Walter Scott and John Wilson. It would take many years, as public taste for stories from the past gradually changed from romanticism to realism, before revisionists would be able to re-examine the Young Pretender’s role in history.

Author of "Blood Beneath Ben Nevis" & "The River Runs Red"