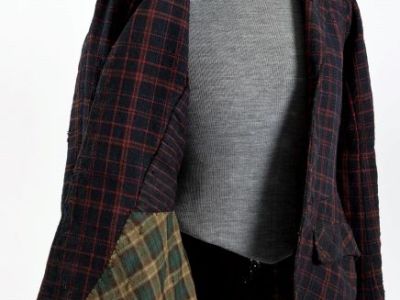 I have been thinking about what to write for this blog post now for a couple of months.  It seems like my words have disappeared from me during the lockdown, as has the ability to study anything in depth.  However I have been doing plenty of sewing and have made over 100 face masks (I have lost count of how many exactly).  When having a chat with my friend Andrew MacAlindon of Highlander Tours a few weeks ago, we discussed how the lockdown felt a bit like being at war, and there certainly are parallels which can be drawn between knitting socks for troops in World War I and sewing facemasks for people I have never met before, or at least it feels like that to me.

Before the pandemic, I had spent the previous couple of years doing the fantastic MLitt. in Highlands and Islands Culture through the Institute for Northern Studies at the University of the Highlands and Islands.  To say this course has been lifechanging is an understatement.  I am quite happy to admit that my reason for starting the course was from watching the TV series Outlander, but I have so much that has not been included in the historical fantasy, and it has inspired me to learn a great deal more.

One thing I have been doing a lot of is alongside studying is making 18th century replica Highland clothing for my friends and myself.  I have learned so much during the process; all about how different making clothes in the eighteenth century was (dresses were essentially made on the person acting as a model and not from a pattern), what different sewing stitches were used and how laborious it is to make a jacket or a dress by hand (at 12 stitches to the inch, to be historically accurate) and I have, in particular, gained a huge new respect for spinners.  To take a sheep’s fleece, scour and clean it, comb it, and spin it takes a great amount of work – let alone the dying, weaving and waulking before it can finally be made into a garment.  I will be doing a project in the near future, using historical methods, and I will be timing how long it takes to make a garment from scratch.  This would perhaps then inform us how long it took Mrs Fraser and Mrs Campbell which is in the West Highland Museum on display with an arisaid from 1796, to make their replica of Isabella MacTavish’s wedding dress, for example.

One thing I have absolutely loved over the past few years has been attending an evening event in Inverness with my husband and friends every April during the commemoration of the Battle of Culloden.  I have only ever been around the battlefield the once, and I found it to be a very harrowing experience.  I, like Diana Gabaldon and many others besides, can feel the presence of the soldiers (of both sides) who fought and died there 274 years ago.  I had a particularly weird experience going around the museum exhibit at the visitors’ centre, which I was finding incredibly interesting, and bursting out crying for no apparent reason in front of a targe. No other targe has had that effect on me!

Back to the commemoration evening event.  Quite a lot of us get dressed up for both events – the daytime commemoration and the night-time event- in replica 18th century dress.  I decided to have a chat with my friends on social media about what the commemoration and the site itself meant to them, and unsurprisingly there were tales of similar stories but most of all there was a generally sense of a personal connection between the place, the people who had fought there, the aftermath of the battle and very much a sense of personal connection – whether it be for clans folk who had fought there or even in some cases ancestors who had been present at the battle.  So is the wearing of the replica clothing somehow demonstrating a personal affinity with the people at the battle? I like to think in a way it is.

As lots of folks reading this blog may well know, Bonnie Prince Charlie has achieved almost mythical status in Scotland for the Jacobite uprising of 1745-6.  He was apparently handsome, charming and had purposefully chosen to wear Highland-style clothing during the entire campaign.  And not really like he is portrayed in Outlander.  I highly suggest reading Arran Johnston’s book on him if you would like to learn more.  The Prince also seems to have left a huge amount of scraps of tartan cloth with various people which treasured to this day (I write that last sentence rather sceptically).  I am not about to start writing about the symbolism of tartan – a cloth which is centuries old and has been used all over the world and not just in Scotland, due in part to the small size of dyepots available to dyers[1]– but there is something particularly symbolic about tartan clothing and Jacobitism, as is clearly on display at the museum[2].  He also left clothing with people all over Scotland, including a glorious waistcoat which has pride of place at the museum.  The skill evident in this waistcoat, and in particular the wonderful embroidery, fascinate me and I could stare at it for hours, trying to unlock its secrets and trying to understand how it was made.  It is in a way tragic that although we know who wore this waistcoat, that we do not know who made it.

So finally to return to the battle.  Next to the Prince’s waistcoat, is a jacket made out of hard tartan which I am told has a convincing provenance that it could have indeed been worn at Culloden.  There is also one in a Glasgow museum which claims a similar provenance.  What is it about these jackets that fascinate people so much? Is it the style of the jacket (which are certainly stylistically correct for the mid-1740s) or is it the fabric they are made from (hard tartan)? Is it who made them or is it who wore them, and when? I think it is a combination of all of those factors which make these jackets so special to anyone interested in Jacobite history.