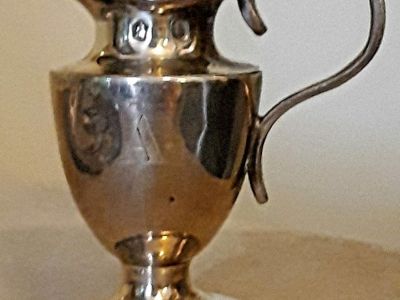 In 1966 A MacDonell and D McRoberts published an article in the Innes Review titled ‘The Mass Stones of Lochaber’* featuring the story of the Crananchan Road Mass Stone and the discovery of the lost water cruet.

The Mass stone was originally sited high above the burn, but due to the erosion of the landscape, the stone fell into the burn and broke in two.  It was retrieved and placed back in its original position.  However, when erosion again threatened the safety of the stone at the end of the 19th century, local men moved the stone to its present position on the other side of the Cranachan Road.   According to the Innes Review “About 1870, Donald Campbell Macpherson (1842-80), a native of nearby Bohenie and a noted Gaelic scholar, carved a chalice and a host on the front of this stone to perpetuate the local tradition of its use for the celebration of mass during the Penal Days.”

The following edited extract from the Innes Review tells the history of the water cruet’s rediscovery:

“An elegant little silver Mass cruet, 2 1/4 inches high, was found in the burn, near the Mass Stone by Angus Cameron.  Angus Cameron found the Mass Cruet when he was a young man. The date of its discovery must be placed somewhere about the year 1880.  The cruet has a capital A (for aqua) engraved on its side, showing that it was the cruet which held the water used in the mass (the corresponding cruet for wine would have the letter V – for Vinum – engraved on it).

One can visualize the priest preparing for mass at the ‘Clach na h-aifrinn’ and the ‘cleireach,’ or alter -server, taking the water-cruet to the burn to fill it with water :  something untoward happens and the cruet disappears into the burn only to be recovered by a young man in the 1880s.  And the most intriguing thing about the Mass Cruet is its date.  The silversmith’s mark clearly shows that it was made by James Moore, Warden of the Dublin Guild of Goldsmiths in the year 1837 or 1838, and this seems to indicate that the Mass Stone was still in use as late as perhaps 1840.  At first sight this seems unlikely since Lochaber had a church at Bunroy, built in 1826, and before that, there was the chapel at Achluachrach, built in the 18th century.  However, there is nothing impossible in the idea that mass was still being celebrated occasionally at the Cranachan Road site perhaps for the convenience of the neighbouring population, or because the congregation at a festival may have been too big to celebrate in the chapel.  It was by no means unknown for religious ceremonies to be held outdoors in the Highlands in the 19th century.”

The Mass Stone still stands in Glen Roy and the silver cruet is currently on display at the West Highland Museum.

From an article first published in 2014. Vanessa Martin has been Curator of the West Highland Museum since 2018.