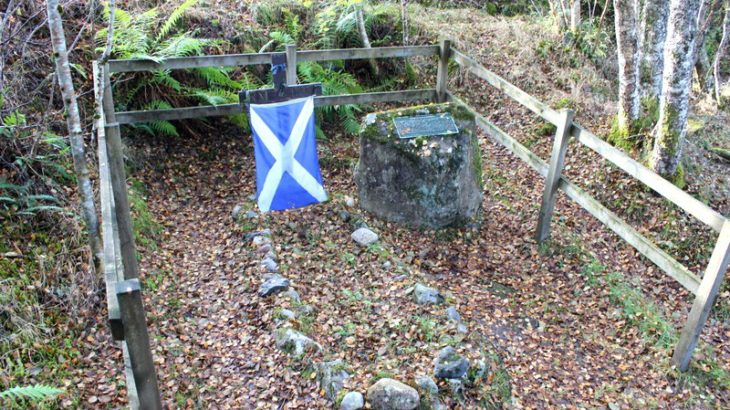 Roderick MacKenzie was the son of an Edinburgh goldsmith who fought as an officer in Bonnie Prince Charlie’s army. It was often commented that MacKenzie bore an uncanny likeness to the Prince.

In the summer of 1746, after the defeat at Culloden, government soldiers cornered a group of Jacobites, including the Prince and MacKenzie, in Glenmoriston.

A party of the King’s soldiers, who were eager to win the £30,000 placed on the Prince’s head, came upon him and, taking him for the royal fugitive, endeavoured to seize him. He made no attempt to undeceive them, but, drawing his sword, refused to be taken alive. They thereupon riddled him with bullets, and he expired with the words on his lips—“You have murdered your Prince.”

The head of the hero was carried in triumph to Fort Augustus, where Macdonald of Kingsburgh was questioned as to its identity. His evidence was unsatisfactory, and when Cumberland left for England, he took the head with him to be submitted to other witnesses. Richard Morison, who had been the Prince’s valet, and now lay under sentence of death at Carlisle, was summoned to London to identify the head; but he was delayed through illness, and before he arrived it was beyond recognition.

The Government were, however, soon satisfied that Charles was still alive; but Mackenzie’s self-sacrifice slackened for a time the exertions of the troops, and probably saved the Prince.

Each year the MacKenzie Clan members meet at the grave for a memorial service.

“Here, in consecrated ground , rest the mortal remains of Roderick Macenzie, merchant of Fisherrow , and son of an Edinburgh jeweller, slain by Cumberland’s Redcoat troops late in July 1746 , three months after the Battle of Culloden, because he selflesly encouraged them to mistake him for Prince Charles Edward Stuart who had closely resembled in age, stature and colouring , and who he served faithfully to the end.“

John McCulloch is a Jacobite enthusiast and historian from the 1745 Association. He administers the popular “Jacobites and all relevant battles and places” Facebook page