PASTIME: A CHILDHOOD MEMORY OF LIFE IN 1940S LOCHABER

In June Betty Bruce recollected her childhood memories of VE Day in Fort William. In this second instalment she reminisces about life after the War.

During lockdown there has been lots of time to reflect. Time to remember what a new normal was for nineteen forties primary school children in Fort William. 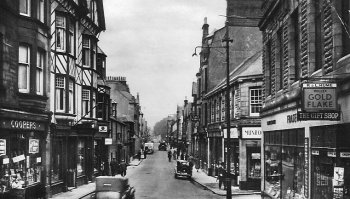 World War Two was over. Everything should have changed, but nothing had really changed. However, the sun was shining and school summer holidays were on the horizon. Time to head for Geddes Drapery. Enough clothing coupons meant a new cotton frock for school prize giving. Then on to the Norvic shoe shop for the inevitable Clarks sandals. Everyone, both boys and girls wore Clark’s sandals when dressed for summer. Finally, ready organised for the big final day at school there was time for an ice cream. Ice cream had long been a myth for wartime children. It was something that would materialise when peace arrived. Now there was a choice of three ice cream shops – Bertuccis , Faccendas and Bonis, to patronise for a cone or a slider.

On the great day we were all assembled in the gym hall lustily sing Kipling’s Recessional, secure in the knowledge that all the pink on the map belonged to us and the summer holidays would last forever. The winds of change were slow to reach the primary schools of  Lochaber.

Now ahead stretched long happy days. It was back along the High Street for a swimming costume, coupon free, from Alistair Macdonalds Drapery. From there it was straight to the Island Pool from Inverlochy, or to the Lingy Pool on the Nevis from Fort William. The most envied and popular family in Inverlochy during the holiday period owned three Mae Wests. Stay friendly with them and one could learn to swim in no time at all.

Aside from the joys of carefree freedom from school, there was the Sunday School picnic to look forward to. From the pier, MacBraynes bus would appear driving along the High Street with traffic parked on both sides. At the church hall everyone piled in singing all the long way to Glenfinnan. There might be a slight delay if the bus had to wait at the one lane Lochy Bridge to allow oncoming traffic to clear.

Another special outing involved going to the station where the huge steam engine puffed gently away. This special treat to Arisaig was organised by the Cooperative Society for members and their families. What an occasion. Excited children hung from every window, blinded by smoke and speckled with soot. On arrival there was the march to the field led by a piper. Everyone took part in running, jumping, sack races, egg and spoon races. But the supreme moment was the handing out of the picnic bags! Possibly if offered at home we would have refused the tea bread, but this was the TREAT. From the brown paper bag we devoured the wheaten scone, the Paris Bun and the Empire Biscuit. All this was washed down by tea served in thick cups, except on one glorious occasion when there was lemonade for all. A tired but very contented band travelled back to Fort William.

Looking back from a new century and a very strange time it might seem that children lacked much of what young people today expect. However, on the whole it was a happy time and these simple pleasures were very much enjoyed and are now remembered contentedly.